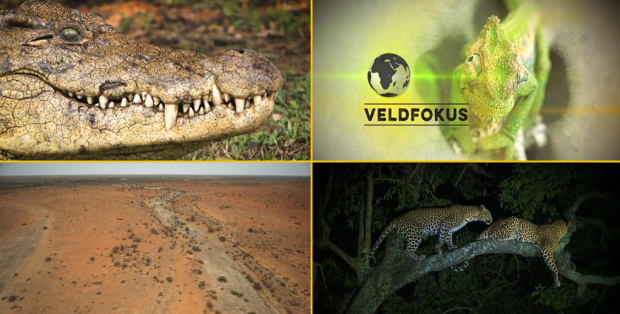 South Africa is rich in many resources but water is not of them. With an average annual rainfall of less than 500 mm a year, SA ranks as one of the 30 driest countries in the world. So when both local and global climate conditions converge to cause the worst drought since 1980, it really is a case of desperate times calling for desperate measures… Bertus travels to the north-west province to bring us first-hand the story of this devastating drought and the effect it is having on farmers.

One animal that most certainly can’t survive without water is the Nile crocodile. But apparently it can survive right in the middle of our urban centres. In this week’s instalment of Wilde Bure, we take a closer look at the toothy smile of the crocodiles that live side by side with humans in the Umgeni River mouth.

We’re looking forward to the second part of our leopards of Djuma story inWonderwêreld, to find out whether the spotted lovebirds manage to escape the prying eyes of a lioness and her hungry pride. We also find out what mischief the 2 young males get up to – will they ever learn the subtle art of hunting?

It’s fun in the sun here in the Veldfokus studio tonight! Although the summer holidays are long over for most of us, there are a few mischievous animals that are keeping the good times rolling! An otter heads off on a fishing trip, an Aardvark has a visit from a friend, and a young elephant can’t keep his enthusiasm under control!

Posted On 24th March 2016 ~ Comments Off on 50|50 Episode 7 Season 7: 31 March 2016
Doodsbenoud: lions These majestic animals are famed for their large and fearsome canines. Their teeth can be as long as 7 cm in mature males…

Posted On 2nd September 2017 ~ Comments Off on 50|50 Episode 23 Season 8: 10 September 2017
iMfolozi Mine: Set in the heart of Zululand are the ancient hunting grounds of Zulu kings such as Dingiswayo and Shaka and it was…

Posted On 16th April 2015 ~ Comments Off on Episode 22 Season 6: April 19 2015
This week on 5050: Elephant senses: superior smell  We are all familiar with the shaggy haired 4 legged members of our police department, usually stationed…
Tweets by @5050TV